, is the most unreliable notification thingy I think I've ever experienced - but that's been going on for some time, and now, to think we got the ticker tape (see #3), do I really expect performance to be better? 5. Ah, performance, do you know how long it took me to "Check In" this evening from my phone with a decent signal?  27 minutes before FB Android App recognized I was in NYC @ Kellarney Rose.  It only took 20 seconds on Monday from the SAME seat.  My email replicated today before I could even get a list of "Nearby Places" on FB 6. SLOW, too many requests going on to update this and update that 7. Clutter.  Makes me feel like I'm in Vegas being bombarded with a million pamphlets for adult entertainment/escort services at every corner (and then some) 8. The fact that some stuff scrolls and some stuff doesn't is annoying 9. I get change, I do.  It is needed, but change for the right reasons, not just to be like the other guys.  Change for what your people need, not what you think they need. 10. Would 750 million and growing still be sticking with it if you sucked? I really think you need to add this to the site (can't promise browser compatibility with HTML marquee):
Mowracer just shared a link: 7 clicks to happiness
1. It has a silver cap 2. It is made of plastic 3. It contains inside a liquid substance blue in color 4. It was invented prior to QWERTY 5. It will fit snugly in my shirt pocket 6. It may leak there 7. It opened up the door for the pocket protector inventor 8. It glides effortlessly across paper 9. It can be an extension of your thoughts 10. It is a pen
I round the corner, roller bag in tow and see the doors of the elevator start to close.  I hurried to ask the occupant to hold the door, but opted for the daring move of sticking body parts into closing metal doors that could surely crush your skull.  The doors opened back up as I stepped into the elevator.  Carrie, as she later introduced herself, apologized for hitting the wrong button to keep the door open.  So for the next 8 floors, we discussed and laughed about why elevator 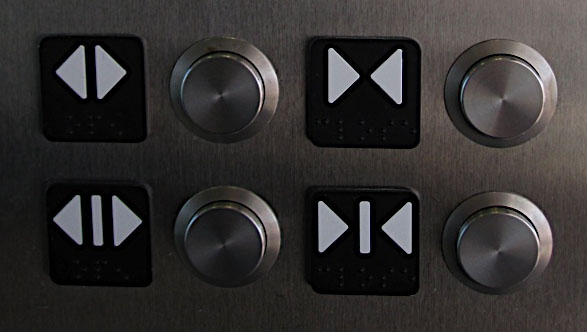 buttons for opening and closing the door were inappropriate icons, which has me wondering, what else it just wrong in the way of user interface that we just accept, and sometimes struggle with.  Since I could not think of any that cause us to come close to the possibility of loosing an arm or a leg should the safety mechanisms fail, today's list is technology news. Tunes: Drinks